Digital focusing schlieren imaging can be extended to high speed video applications. To complement the sTube™ receiver, we have developed a high-intensity digital backlight system based on transparent LCD technology. This is capable of providing sufficient intensity for microsecond exposures over customer-specified durations. The frame rate is limited only by the camera capabilities. We have successfully tested it with frame rates up to 8,400 fps with a Phantom Miro m320s, though it can be readily adapted to a wide variety of cameras.

Unlike classical schlieren, which needs a point-like light source, focusing schlieren uses a large-area light source. Modern pulsed LEDs are well suited to this. They are not very effective as fast, high-power point sources, since it is difficult to squeeze more than a a few watts of radiometric power out of a single LED, but an array of closely-spaced LEDs can easily put out dozens or even hundreds of watts for short duty cycles. By matching the optical etendue of a flat LED array to the focusing schlieren optics, we can couple the output of dozens of LEDs into the system, which allows the high optical throughput needed for exposures in the range of a few hundred nanoseconds to microseconds. With classical schieren, such short exposures are really impractical without expensive and finicky arc flash sources. Focusing schlieren can also utilize large arc flash sources like studio photography flashes that produce a thousand times the energy of quasi-point-source arcs. This flexibility allows us to use a range of low-cost commercially available light sources that could never be used in a classical schlieren system. The images below, for example, used a 300 W-s xenon studio flash (300 Joule wall-plug energy, probably around 5-10 J radiometric).

Usually, an illuminating array can be as much as 1/4-1/3 the dimension of the modulator for ideal etendue matching, so since the modulator is usually around twice the size of the field of view, an illuminator about half the linear dimension of the desired field of view can be coupled into the optics. For example, a 15x15 cm LED array with a pulse output of hundreds of watts can dump nearly all of its energy into a 30x30 cm field of view, which could easily expose even a low-cost CMOS sensor in a hundred nanoseconds. This allows us to achieve schlieren light throughputs dozens of times higher than classical schlieren systems can practically achieve.

We typically use high energy xenon sources for high-speed video sequences in the multi millisecond range, but we can also use pulsed LEDs to get sub-microsecond snapshots without a specialized high-speed camera.

Below are images that were shot with this system of a candle flame interacting with an air rifle pellet and post processed with our specialized schlieren image processing technology. The original images have 1600x1200 pixels with a 5 microsecond exposure and 1,250 frame per second rate.

This innovative approach to focusing schlieren features simple alignment and a large area, up to 20 inches across with this system, without the cost and weight associated with the 20 inch mirrors that would be necessary in a comparable classical schlieren system. The backlighting system comes in at a mere 66 pounds, compared to a 20 inch mirror system which could come at a few hundred pounds with the necessary mounting system. Commercial transparent displays up to 84 inches diagonal are available, allowing a staggering 40 inches of schlieren field of view—a comparable classical Z-type schlieren system can weigh as much as 1000 pounds with the mounting.

Use the < and > keys to view the previous and next frames. 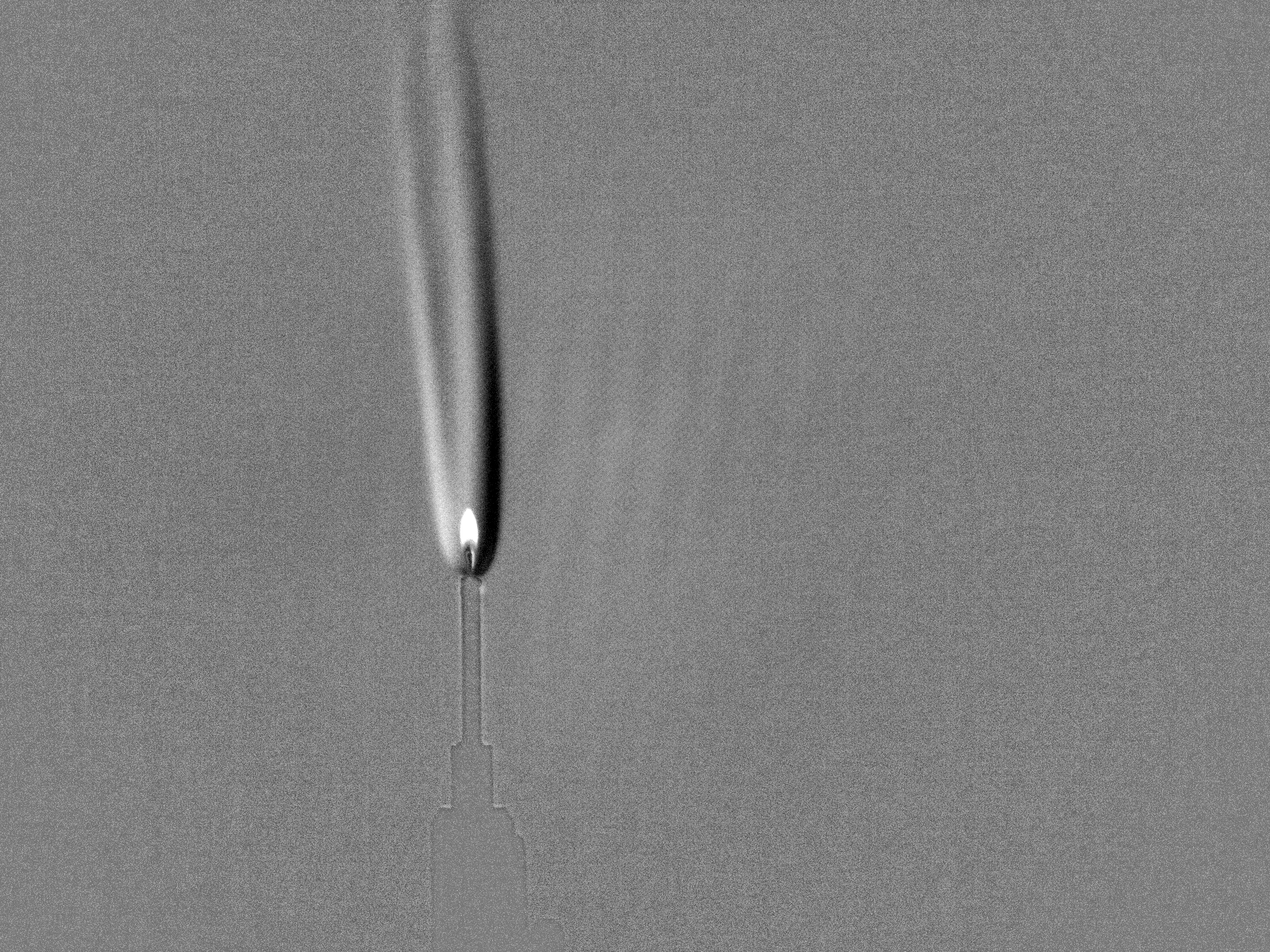 The flash has just triggered. This first frame often doesn't balance very well because of timing jitter relative to the sharp onset of the flash intensity, so there will be a little bit of a discontinuity in the image brightness on the next frame.
0.625 ms 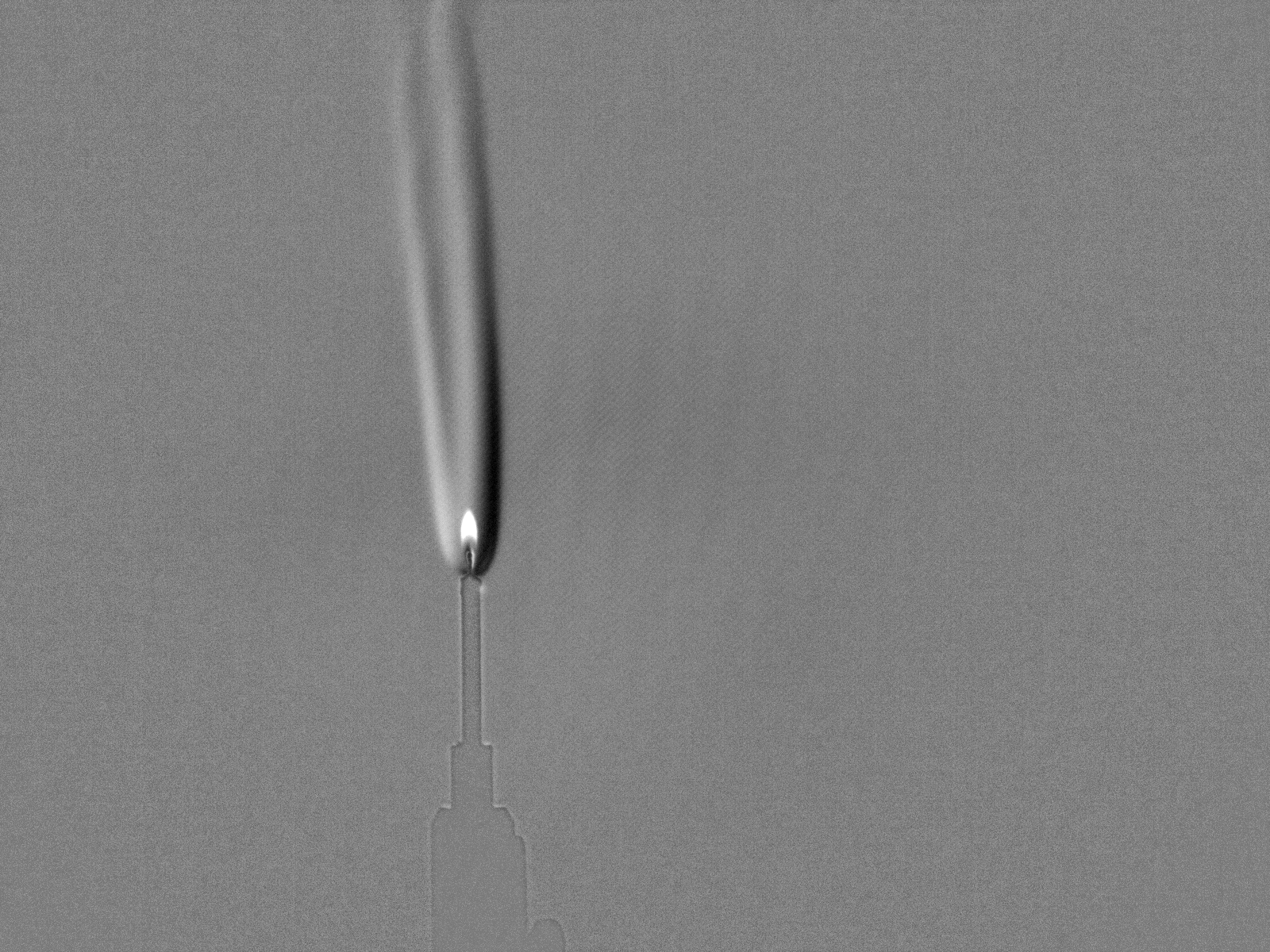 The pellet is currently hurtling toward the frame, but it hasn't quite arrived at the unsuspecting candle yet. The candle flame itself is much brighter than the flash-illuminated background, but the schlieren effect around the hot gas column over the candle is still visible. In this steady-state regime, the column is in a smooth laminar flow.
1.250 ms 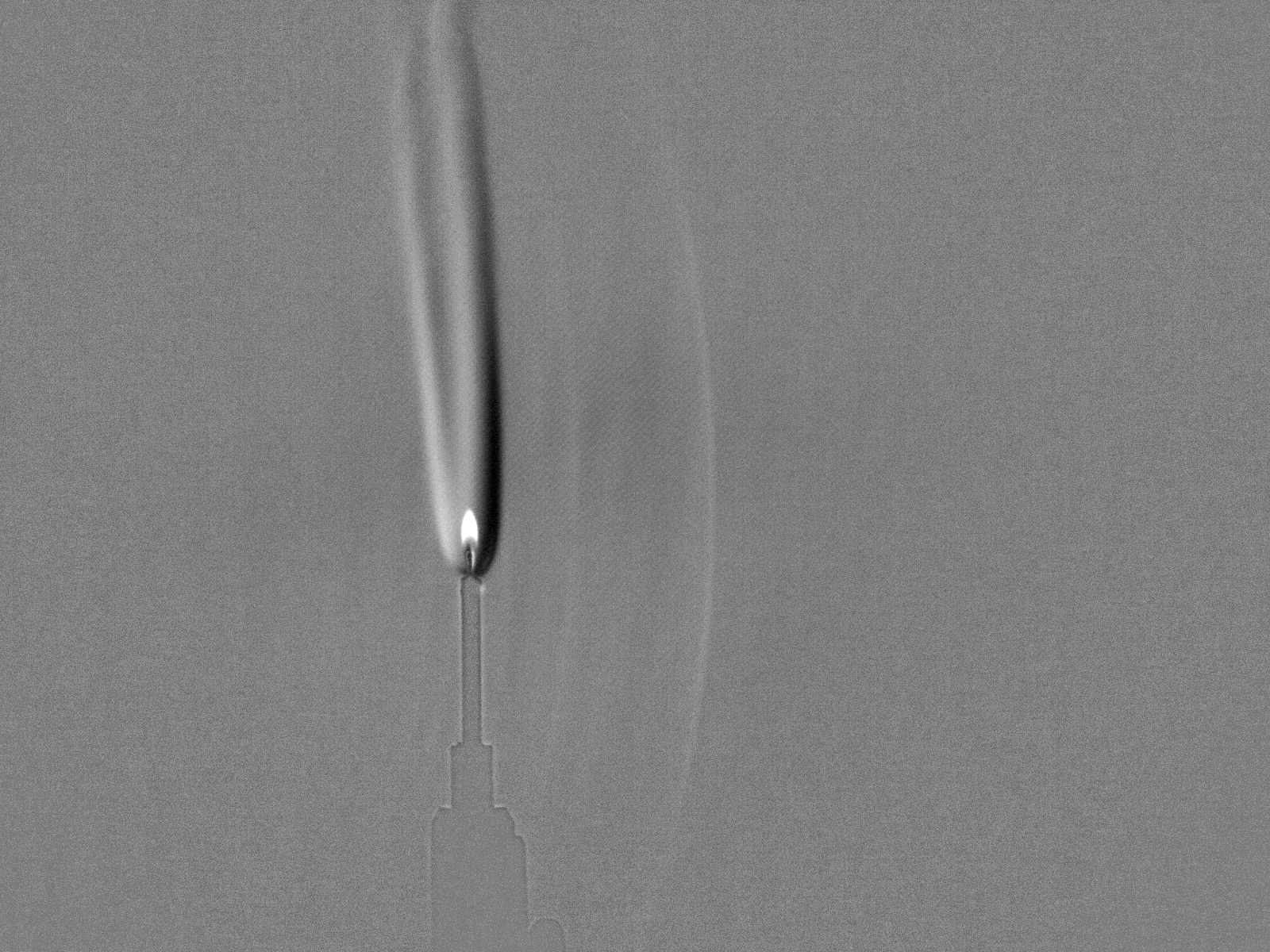 Here, the initial shock wave (the white curve) has just passed the candle, with little disturbance. This shock is relatively weak and is due to the air being forced around the pellet and exiting the barrel, so that it runs ahead of the pellet shock.
1.875 ms 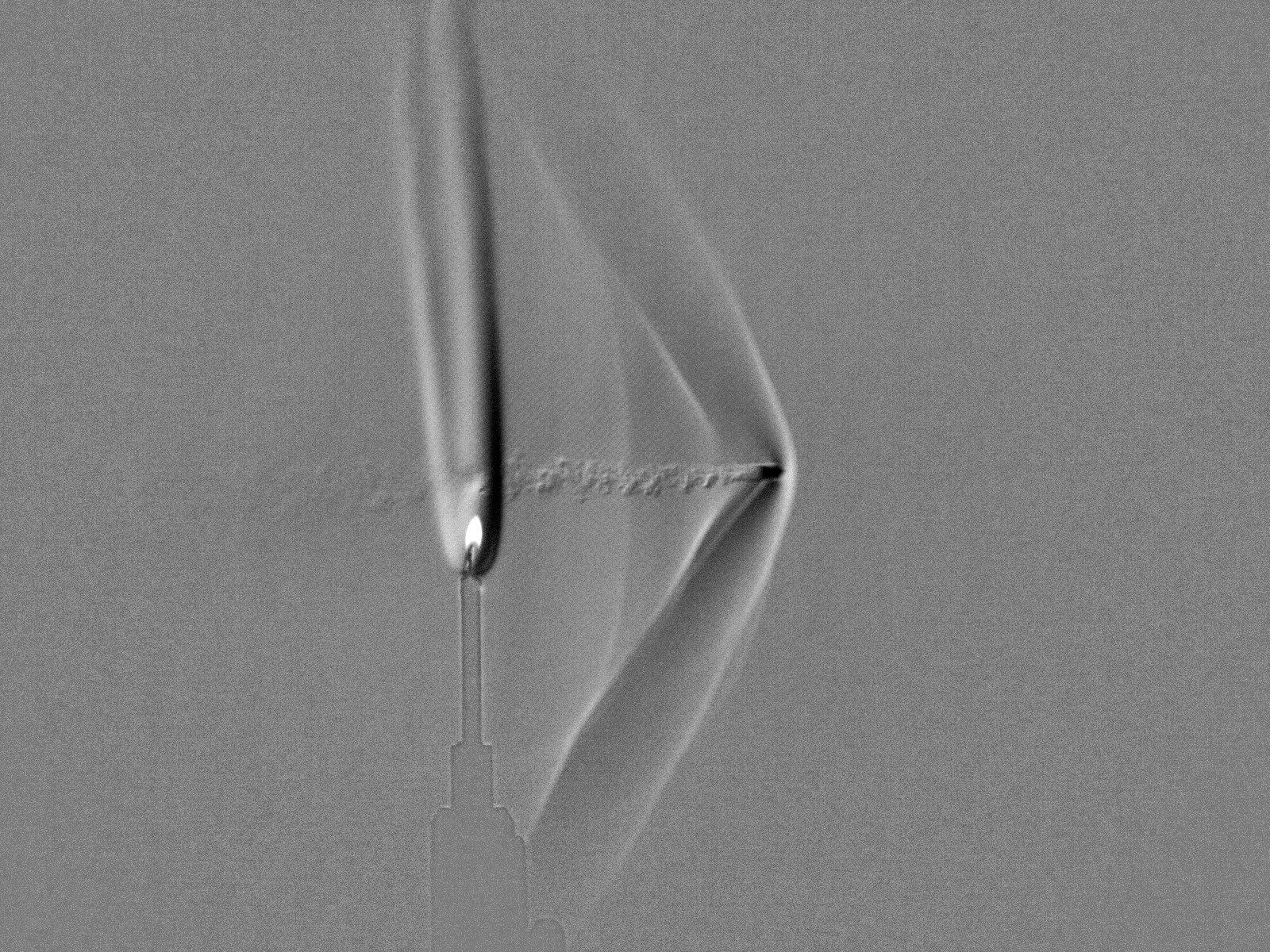 This frame is where the real action starts. The pellet has just passed over the candle frame. The stonger shocks associated with the pellet are clearly visible, along with its turbulent wake. Even at this point, we can see some disturbance of the pellet wake and the candle flame. Note that the front edges of these shockwaves are white (positive contrast), which indicates the direction in which they're bending the light.
2.500 ms 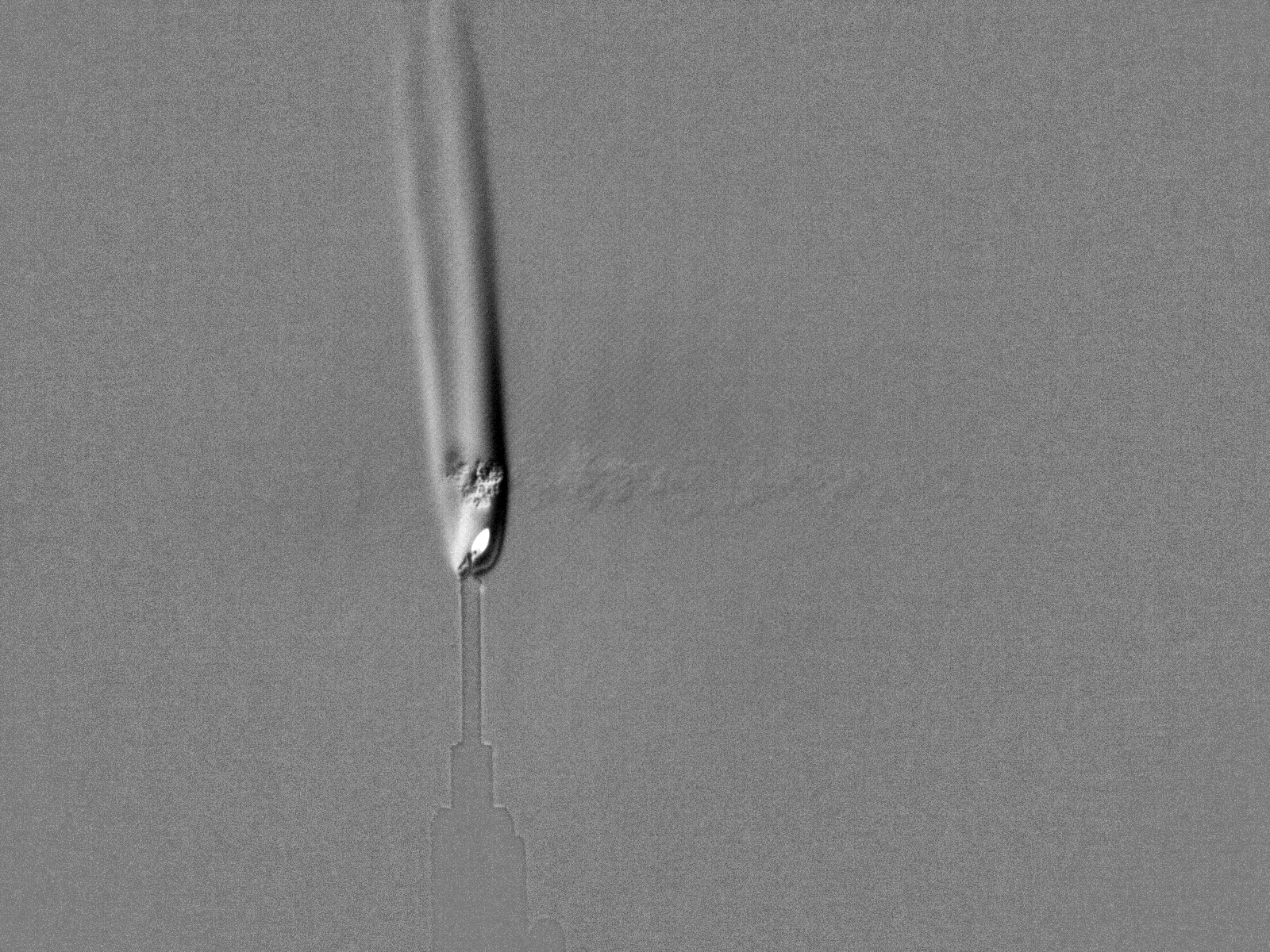 Here, the pellet has left the frame, but the energy imparted to the air around the candle is dragging the luminous gases away from the steady state position and the turbulent wake of the pellet has disturbed the hot gas column.
3.125 ms 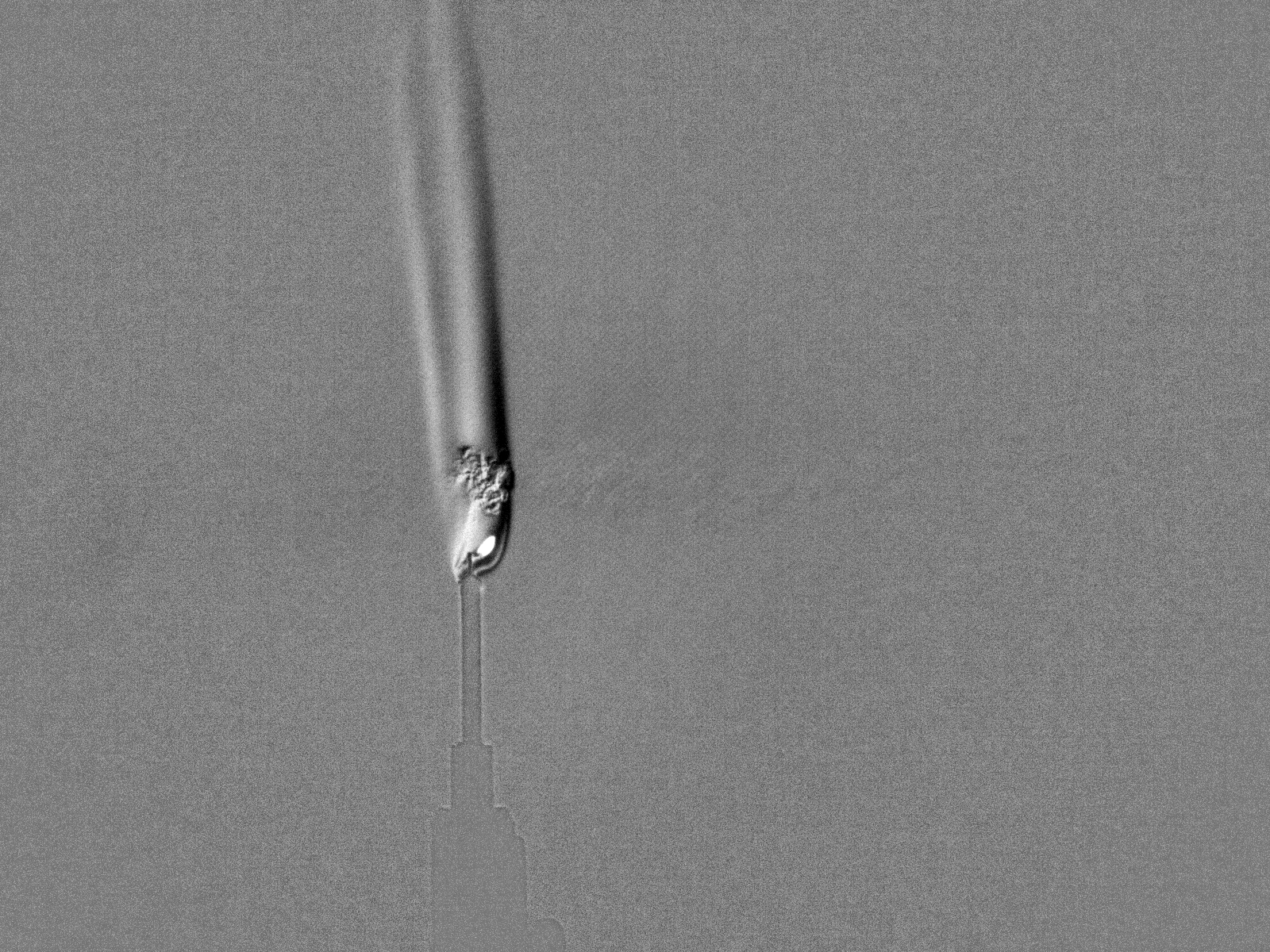 To the left side of the image, we can note a faint cloud that will (relatively) slowly drift across the image field over the next few frames. This is the remnant of the puff of air behind the pellet.
3.750 ms 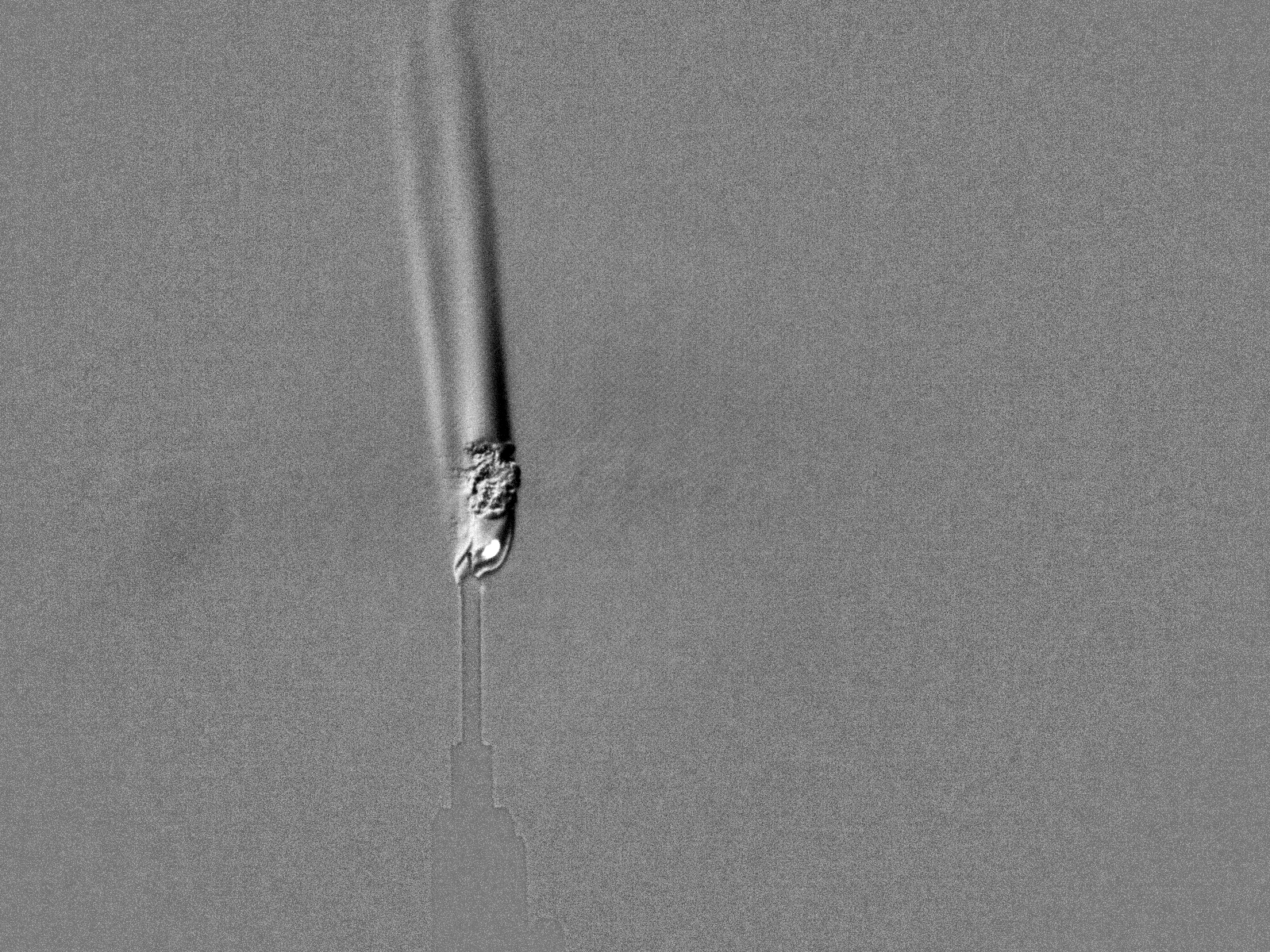 Around this point, the background is starting to appear grainier, which is because the overall light level of the raw images is rapidly decreasing as the flash fades. The apparent light levels in these processed images is maintained using digital image processing techniques, but we can't get around the underlying physics of the noise in the optical signal. This is also why the candle flame appears to keep getting brighter, though it's actually fading, just not fading as fast as the flash.
4.375 ms 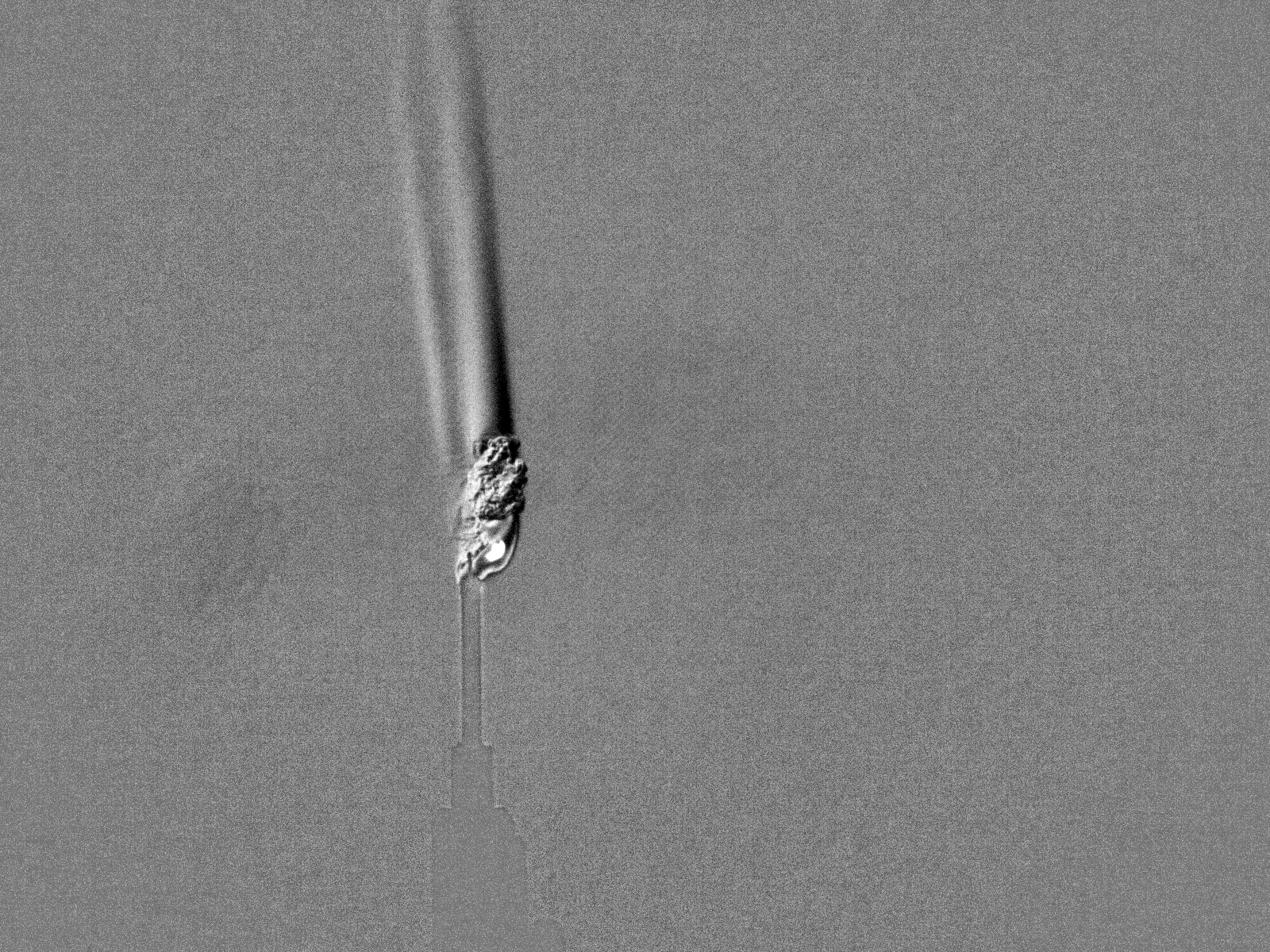 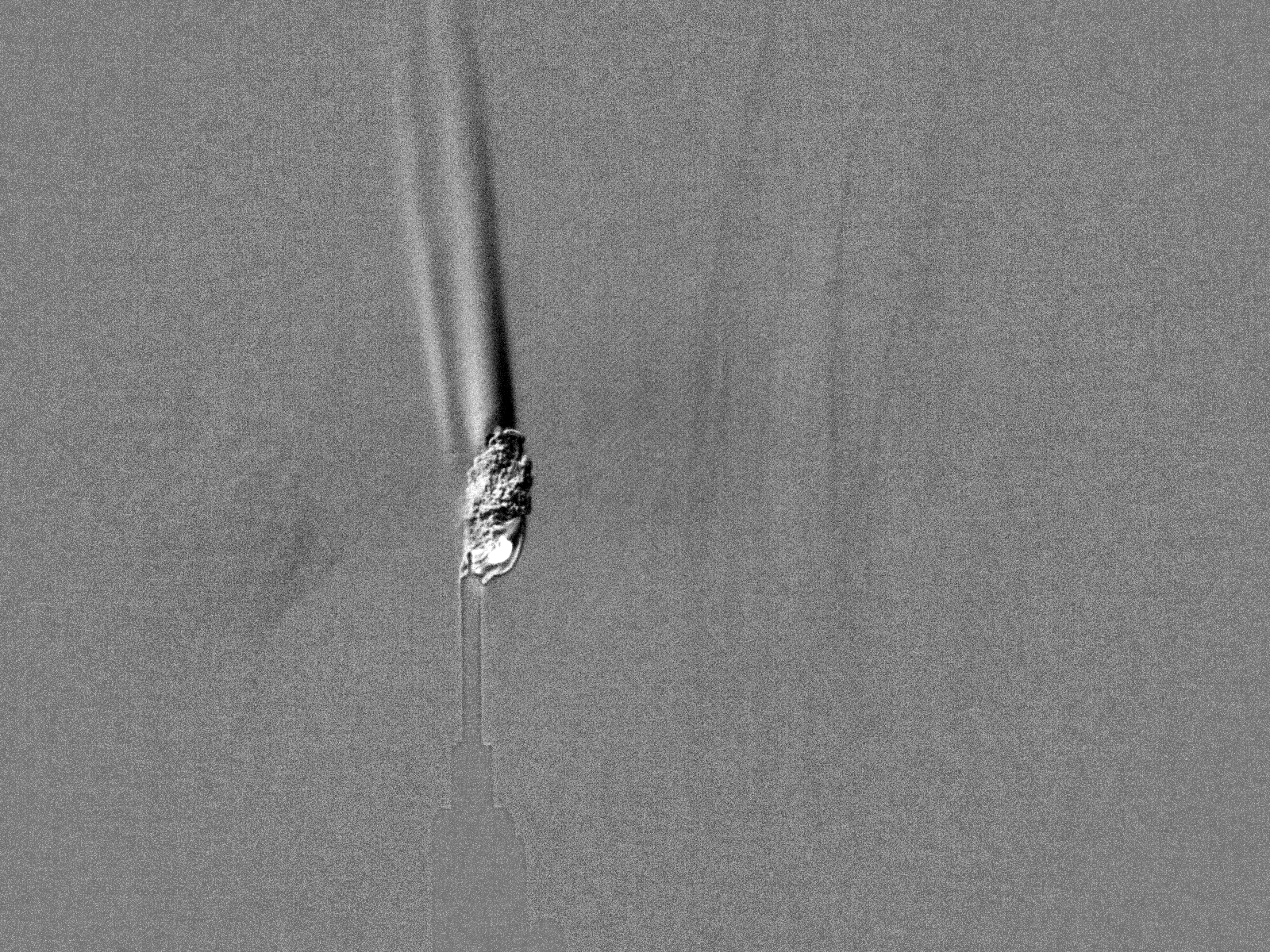 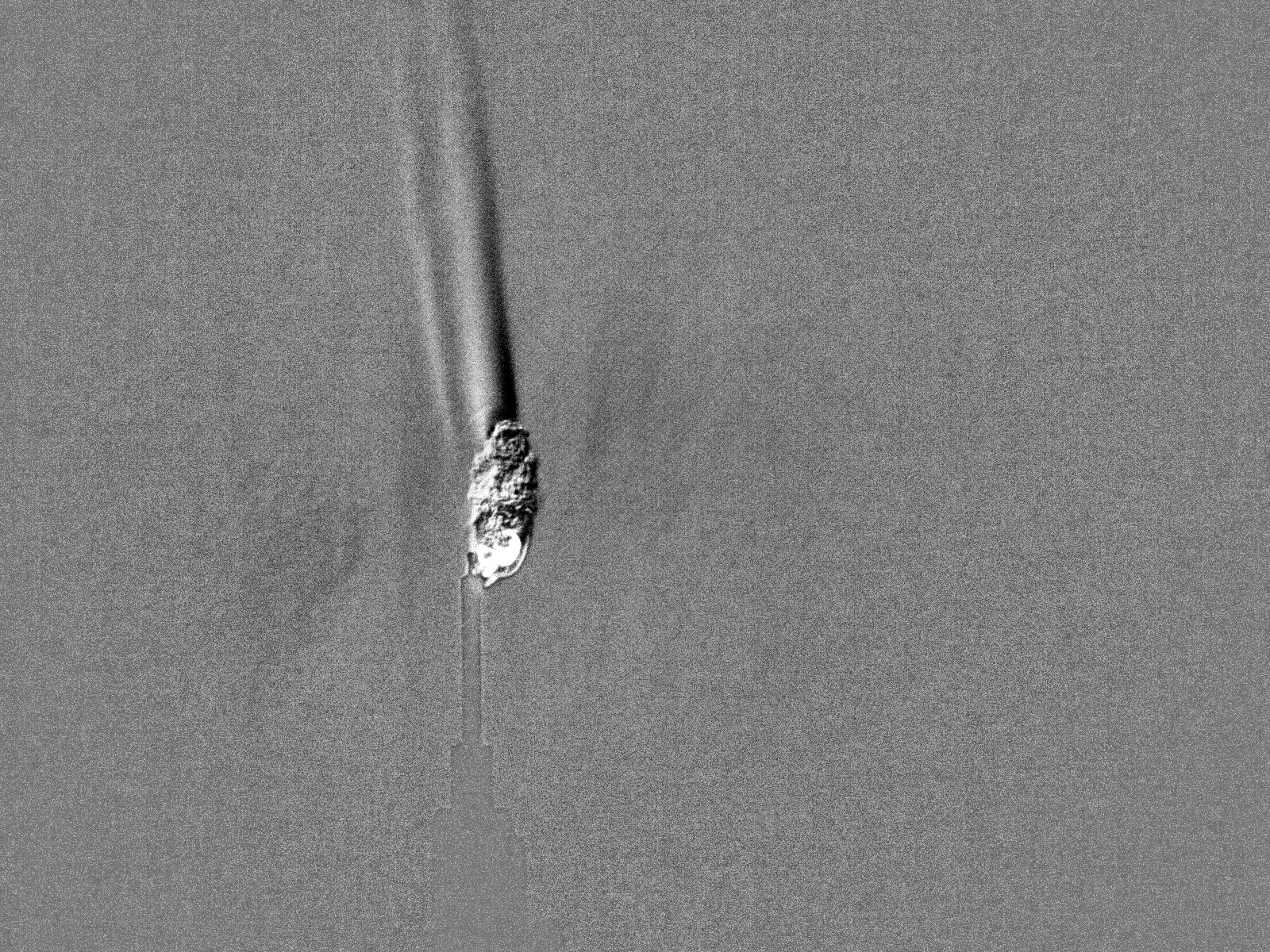 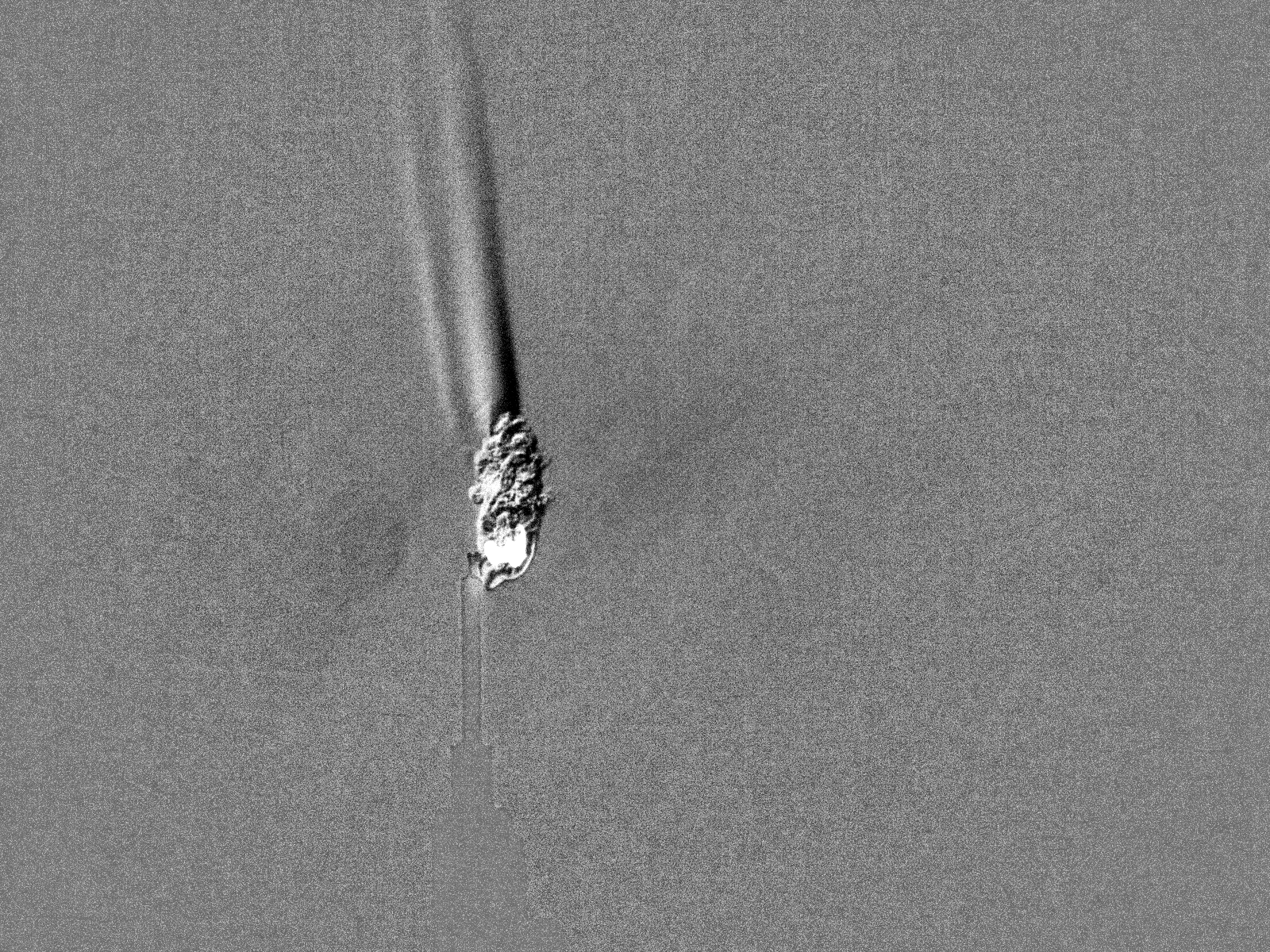 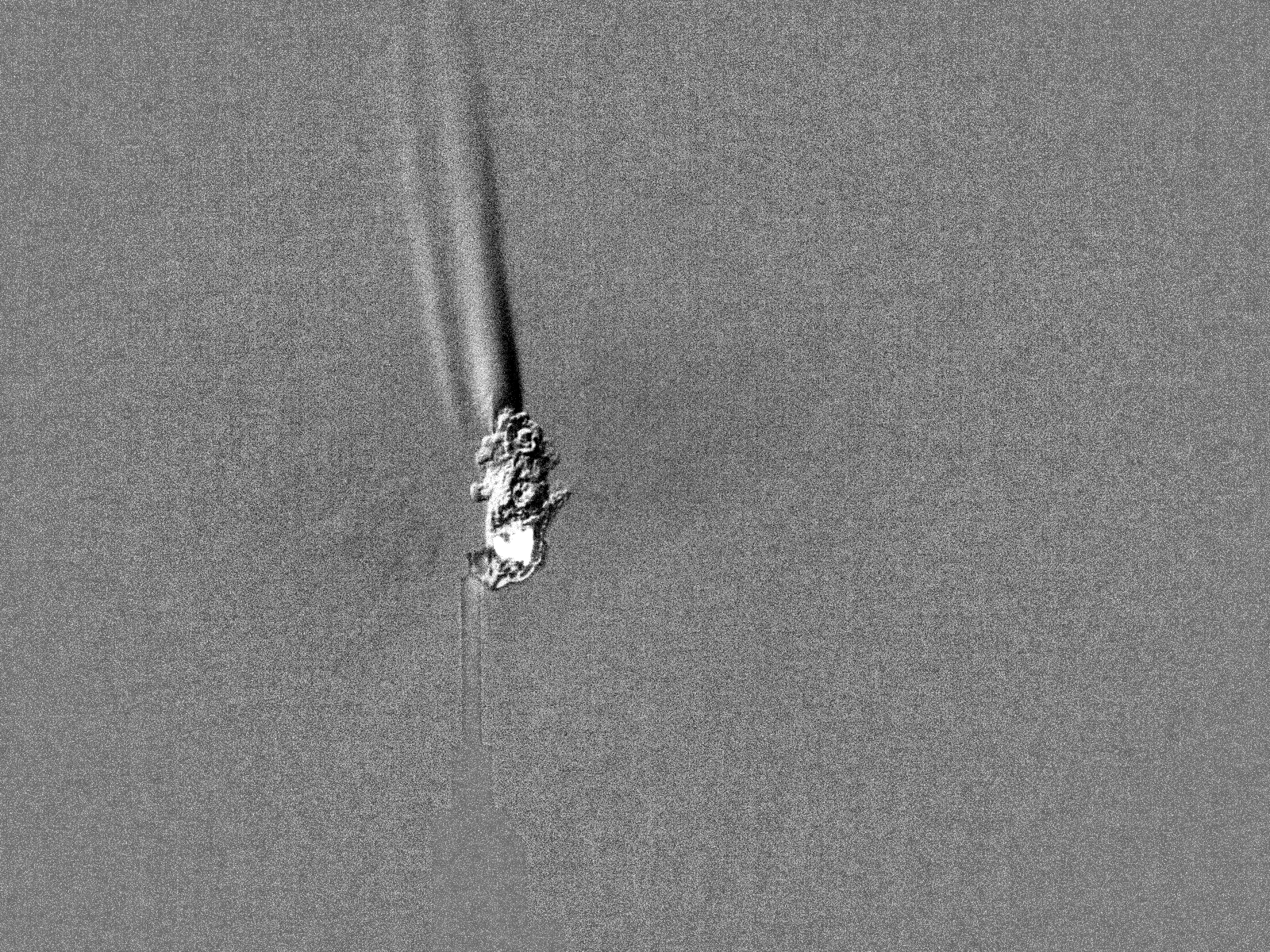 In this final frame, the flash has almost completely faded.

A few images below show the whole high speed system set up in Spectabit's laboratories. The sTube camera system in these images is equipped with a Phantom Miro m320s.

Videos taken with this system can be seen on our YouTube channel!.